The town of Oristano, located in the middle of the western coast of Sardinia, overlooking the heart of the gulf every year at carnival, relives the splendor of an ancient medieval joust: The Sartiglia.

The Sartiglia is not an historical reenactment but a grand equestrian festival event which for centuries has traditionally been kept alive in the heart of this ancient medieval capital.

Sartiglia takes place on the last Sunday of Carnival and the following Tuesday.  The Gremio (Spanish for Guild) the two main guild are that of the Peasants and the Carpenters, two ancient guilds, perform respectively on the two days an identical ritual.

The ritual is the organization of a race to the ring, this is in fact where the meaning of the term Catalan sortilla originates. At the carousel (a tournament in which groups of knights take part in horse races and other demonstrations of equestrian skills.) on both days, the same hundred and twenty knights, masked and coated in old traditional Sardinian and Spanish clothes. Those who perform ride on powerful horses richly decorated in traditional caparison (an ornamental covering spread over a horse's saddle or harness.). During the two different days of the tournament there are two different Componidori, However the knight who will controls the race i.e. Su Componidori, is chosen respectively by the highest authorities of the two guilds.

The chivalry ritual sound of trumpets and drum rolls accompany the herald on horseback through the streets of the medieval city in the early morning announcing the festival has begun. The impressive ceremony of Investiture Componidori, is an elaborate ceremony where several young women cloth the Componidori and literally dress and sow on his clothing. The Capo Corsa dressing takes place before an audience where emanations are high and people gather to share conversation and vernaccia; a local wine that is sweet and strong. This is an important price to the whole of Sartiglia because he is the one who will oversee the entire equestrian event, from the beginning of the event it is a truly exciting and beautiful moment. 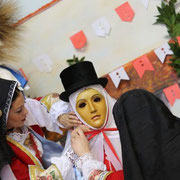 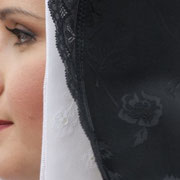 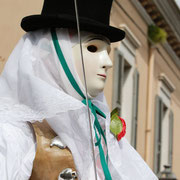 This knight, chosen, will drive the Sartiglia, wearing traditional garments and an androgynous mask of wood, he is the real champion of the Sartiglia. A long rich and colorful procession with hundreds of people wearing traditional Sardinian and Spanish clothing line the street in anti caption to see the chosen Knight. Also are the alfieri, these are the banner holders who raise old flags representing the different groups. The trumpeters and drummers solemnly accompany the representatives of the different houses and their coat of arms, here they salut the Componidori and his knights.

Once the procession reaches the ancient courtyard at the cathedral of Santa Maria Assunta, the Componidori officially opens the first race. Componidori faces a galloping path truth the narrow and winding streets of Oristano with his sword aimed to capture a tin star with a central hole, hanging on the path at the center of the town. A huge crowd watches in awe at the spectacular event eagerly with food, drink and cheers. 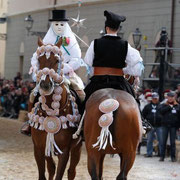 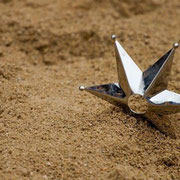 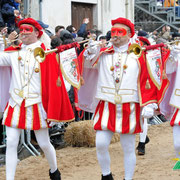 After Componidori only a few of 120 riders are selected by the capocorsa, to try their hand in this test of skill. For the riders who participate in the event, it is a time of honor and a great challenge. The tension build with each rider who takes their turn at the gauntlet to capture a star. The tension in the crowd fills to watch those riders who are chosen with the opportunity to make the run. There is an incontestable decisions by de Componidori, at that time on the field, to called upon those who are considers most suitable and deserving to make the run. The group consist mostly of but is not limited to the veterans. The ultimate race riders and the Componidori retry the test, this time trying to put the star with the sword, a wooden spear. The crowd is jubilant at the pass of knights most skilled and fortunate enough to capture the star.

In memory of the target centered, they will be given a small silver star. The race ends with the star Sa Remada, evidence of extreme courage of Componidori that, once again, face to gallop the route of the cathedral, lying with the back on the horse, and with his scepter of violets and periwinkles blessing the crowd.

From here the procession of figures, led by trumpeters and drummers, gremio accompanies the protagonist of the day, his Componidori and the other knights, along a path located near the ancient medieval fortifications of the city. On this road all one hundred and twenty knights, in pairs of twos, or threes ride the horses and compete full gallop daring each to perform creative acrobatic movements. The passage of each pair is announced by the sound of the trumpets and a long rolling of drums accompanies the entire route bending round the streets. There are three paired horses galloping on which the three knights make acrobatic figures standing on the backs of the horses in an upright position or making human bridges.  The crowd raptures in cheers, loud roars and disbelief, gasping at the breath taking performances. 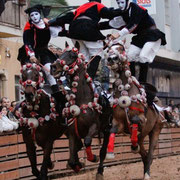 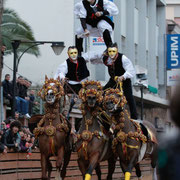 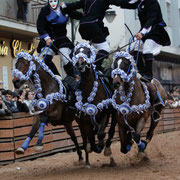 The day of racing ends at dusk just as it started, the trumpeters and drummers sound the call accompanying the procession of knights from all the different gremio of the day. the will follow the procession to where the ceremony of the undressing Componidori takes place. The hero who has led the carousel now removes the mask back rider. Rivers of Vernaccia, the wine and drink a toast typical product Oristano, together with zippole, traditional pancakes, are then offered by gremio to all PARTICIPANTS in the race as a sign of celebration with the traditional greeting of attrus annus, so that, for other years, all together, we can still celebrate, running new editions of Sartiglia.

DISCOVER WITH US ONE THE MOST AUTENTIC SARDINIAN CARNIVAL THROUGH THE HOLIDAY PROPOSALS ORGANISED BY THE TRAVEL AGENCY VISIT SARTIGLIA, THE OFFICIAL TRAVEL AGENCY FOR THE SARTIGLIA - CLICK HERE