Secrets of the Sinis Peninsula in the Gulf of Oristano

In the traces of the giants of Mont'é Prama, the Sinis unveils the story of a millennial and authentic people, unique in its kind: Nuragic civilization.

A beautiful hike of 6 km on a simple coastal path with the colors and scents typical of the Mediterranean.

We will cross several panoramic places overlooking the protected park of Sinis and the Gulf of Oristano.

During the excursion we will take a guided tour of the Spanish tower and the archaeological site of Tharros, one of the most visited of Sardinia.

We will end the day with an aperitif at sunset with wines from the region.

Program:
Departure from Cabras at 15:00 and visit of the museum to admire the statues of the giants of Monte Prama and the archaeological remains of the city of Tharros.
16.00 Transfer to San Giovanni di Sinis and visit the church of San Giovanni di Sinis (6th century AD)
Departure from 17:00 for the excursion in the peninsula of Sinis, archaeological zone of Capo San Marco Tharros.
Brief stop for a swim in the hidden creek under the lighthouse of Capo San Marco and return for a tour of the ancient city of Tharros (8th century BC - 10th century AD). 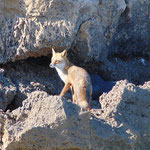 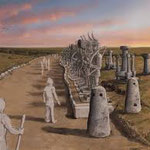 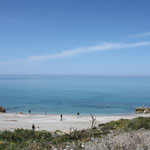 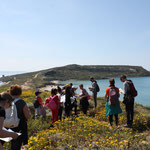 What is included: service guide, assurance

A deposit will be required by the confirmation

In case of bad weather or unavailability of the guide, the excursion could be canceled. We will offer you the following alternatives:

How to reach the meeting point

Once the booking is confirmed, we will send you the exact location via a google link. The meeting place is reached by one's own means.